Being an Effective Decision Maker 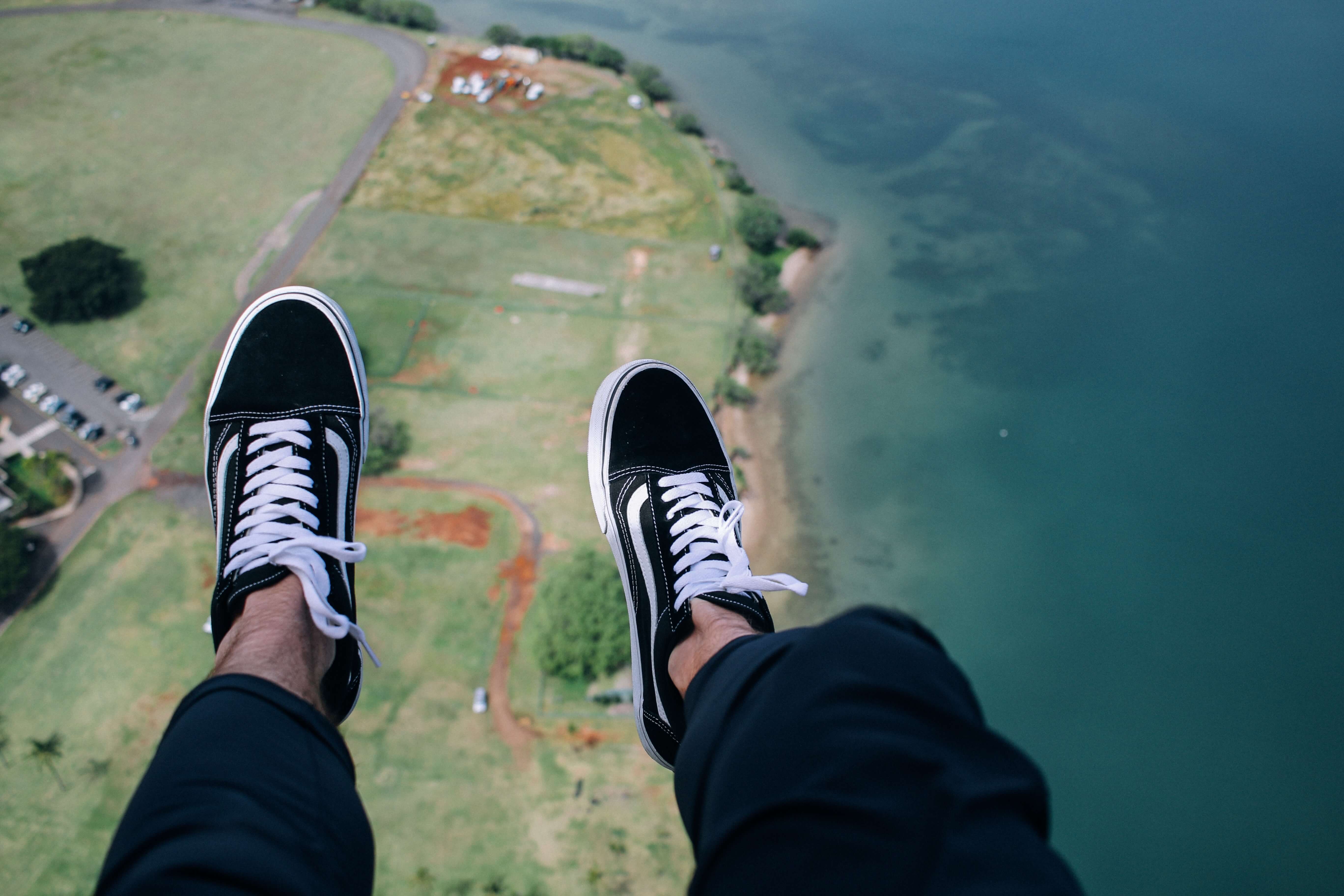 This is part 7 of the Principles Sequence, a series on the Ray Dalio book. Read the overall book summary here.

I think one of the more interesting ideas I've come across while summarising Ray Dalio's Principles is this notion that your decision making ability is something you can get better at, and it's something you can improve in a way that improves life outcomes. IQ — on the other hand — is something that affects life outcomes but that you can't really improve. Implication: all things being equal, focus on improving decision making ability.

But this prescription isn't something that's immediately useful. It's not clear, after all, how to judge that you've improved at decision making. There isn't a standardised test you can take where you get scored for decision making. And you can't really go back in time to critical points in your life to run decisions in parallel, keeping the timeline that yields better results.

Still, logic dictates that you're supposed to consciously work on your decision-making. How do you do this?

This is a summary of the final chapter of Ray Dalio's Life Principles, titled “Being an Effective Decision Maker”. The chapter covers the basics of good decision making, before closing off the Life Section of Principles. What it doesn't do, however, is give a satisfactory answer for evaluating that you've improved. I'll take a stab at the end of this post anyway.

Learning and then Deciding

We've covered the emotional aspect of learning well; a lot of this has to do with your ego barrier, as well as watching out for blind spots. Getting better at managing yourself is key to learning well, which then flows directly to deciding well.

But how do you actually learn well? This consists of two major things:

Synthesising accurately consists of two bits. First, synthesise the situation at hand. Second, do that over time.

Synthesising the situation at hand means being able to filter the important bits of information out from the infinite stream of data that comes at you in daily life. Dalio notes that some people go through life collecting all kinds of observations and opinions like pocket lint, instead of keeping only what they need. Meanwhile, others react disproportionately to unimportant things; or they miscalculate and overlook small things that turn out to be important.

The ideal here is that you’re able to make fast and accurate judgments on what the real risks are without getting bogged down in details.

Dalio includes a couple of pointers:

The second part of synthesising is to synthesise over time. This isn't easy; Dalio argues that you either need to learn the type of thinking that is able to do this, or you need to adopt a system that allows you to keep track of your dots through time. He demonstrates a visualisation technique in Principles: 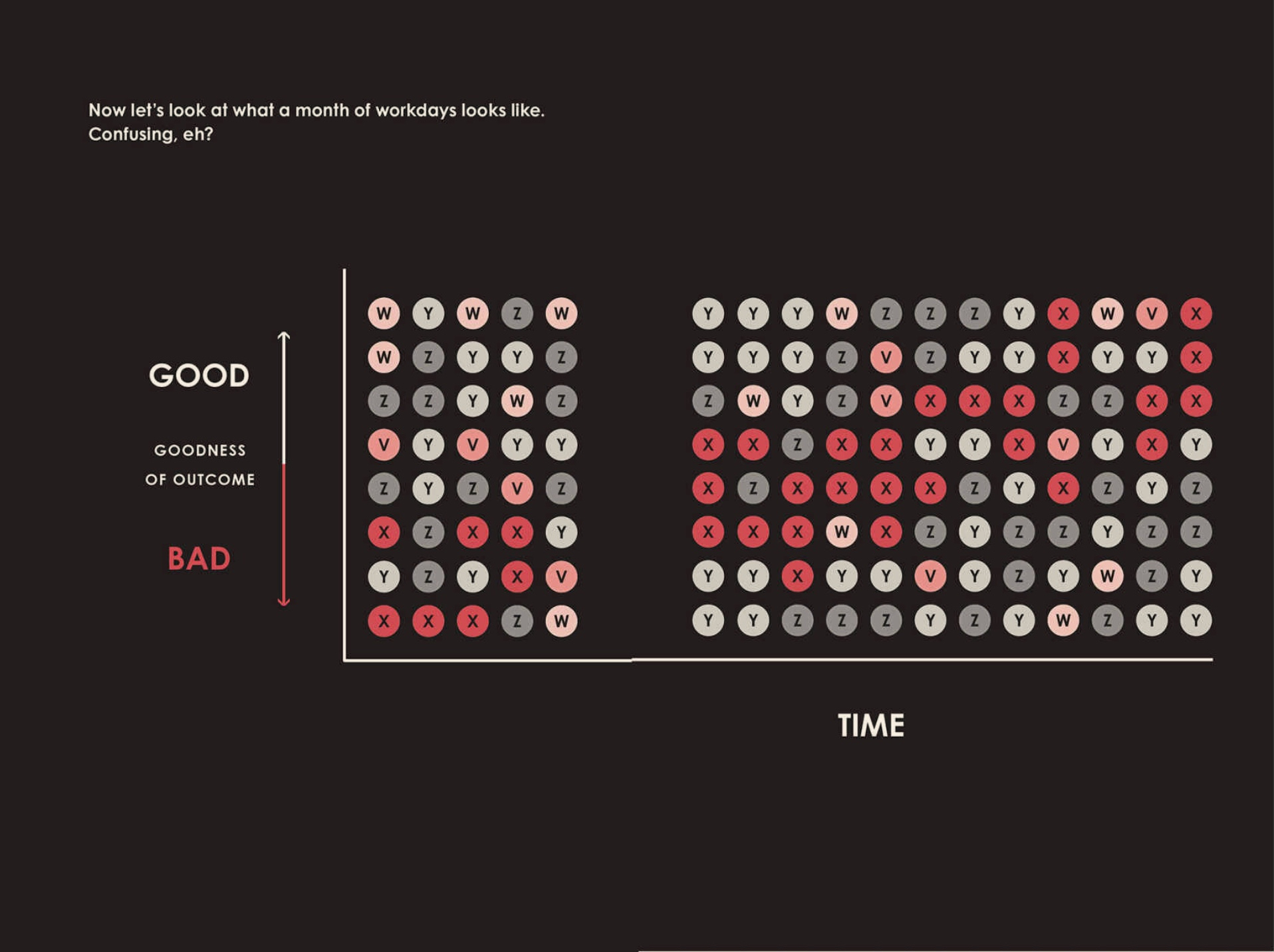 Each of these dots represent an event type in a company. Where they are placed vertically in relation to the other event dots represents how good or bad the event is. For instance, if event type ‘X’ (the red dots labelled X) are customer service complaints, then the closer they are to the top of the visualisation, the more successful the interaction was.

This demonstration isn't an argument for this particular visualisation; rather, Dalio posits that this the kind of interpretation and filtering is what is necessary for synthesising information over time. Notice that these visualisations concern themselves only with what is broadly true. Is X rising or falling? What is the goodness of X relative to the other events in a day? There's no space for nuance, detail, or even absolute values for the ‘goodness’ of X.

The pointers Dalio gives us on synthesising your situation over time all speak to this power of being imprecise:

Decision making depends on navigating levels of ideas. For instance, the following thought process demonstrates the link between goal and action:

This is a common reasoning device, familiar to anyone who has tried to structure an argument before. The key here is to recognise that organising topics into a hierarchy of levels will make decision making easier, because you aren’t facing an undifferentiated pile of facts. Decision making needs to take place at the right level, but also be consistent across levels. For instance, figuring out what you'd like to do in your career should be consistent with what you want out of life, which is a level above. You don't need to consider what you want out of life when making a decision at the career level; similarly, you don't need to consider what actions you need to take to get you to the career you want, at least not until you've settled which career you'd like to go after.

The rest of the chapter consists of a grab bag of points on the second part of decision making — that is, actually making the decision:

Do evidence-based decision making. That is: logic, reason, and common sense are the best tools for synthesising reality and understanding what to do about it. Slow things down and consider it consciously, instead of letting only your intuitions (and subconscious biases) guide your decision making.

Make decisions as expected value calculations — this is a reference to applying probability to decision making: something other finance writers like Nicholas Nassim Taleb have covered in their oeuvre of books. Every decision has a probability of success and a reward, as well as a probability of failure and a penalty. This then leads to the following guidelines:

Simplify — there's a lot of benefit to be had from ignoring unnecessary detail and getting the big picture right. One aspect of this is to ...

Use principles — Dalio argues that taking the time, like he has, to systematise the principles that have reliably worked for you will work wonders for your efficiency. One of the best ways to approach decision making is to remove the need to do it: if you have a principle written out, you can recognise when a similar situation has arrived, and apply your principle to it.

The steps to systematise your principles:

Dalio notes that this isn't easy, but the rigour of writing things down, and evaluating it would do wonders for your decision making practice. He also notes that you can use other people's principles if they worked for you — which is one of the reasons he wrote Principles in the first place.

Finally, turn principles into programs. This is Dalio's final contribution. There's no reason why you can't turn your decision making principles for life into programs, the same way that Bridgewater turned their trading principles into finance advisory programs. Bridgewater has done more than most in pushing this idea forward — Dalio notes that the firm has built a bunch of internal apps to help with managerial decisions. He believes this is the way forward, for machines are consistent in a way that humans will never be.

I've been thinking about the nature of improving at decision making recently. Rereading Principles has been an exercise in improving your rationality (and by extension, your decision making); how do you know you're getting better at it?

“In order to have the best life possible, you have to 1) know what the best decisions are and 2) have the courage to make them.”

Dalio closes this chapter with a note that “in order to have the best life possible, you have to 1) know what the best decisions are and 2) have the courage to make them.”

The latter is easier to improve on when compared to the former, if you're a sufficiently introspective person. During the writing of this series, I learnt that a) I was overly defensive when dealing with criticism, that b) I was wasting time arguing with more believable people (when I should have been listening), and that c) I was lying to myself with regard to my fear of failing as the root cause of my procrastination.

These aren’t necessarily easy things to fix, in absolute terms. But they are difficult in a way that I am used to. I've read and applied Principles during my student days; I can do so now.

Improving in terms of ‘knowing what the best decisions are’ is much harder. I think you are only able to do so in retrospect: you can say to yourself, oh, I wouldn't have made this decision two years ago, and you know you've improved. But this doesn't help you with making better decisions today.

I can think of three ways you can tell that you've improved in identifying good decisions.

The first way is to focus on the process, not the goal. The goal may be to ‘make better decisions’, but the process to achieve that is more reproducible than measuring your outcomes. The process I'm talking about here encompasses most of the Life Principles we've covered so far in the Principles Sequence. In particular, I want to highlight the emphasis on overcoming your two barriers: a) the ego barrier, which is the result of your subconscious fighting your conscious mind when you synthesise the situation at hand, and b) the blind spot barrier, which results from your view of the world, and prevents you from a full understanding of your reality.

The second way is to adopt Dalio's method of triangulating your opinions with people who are more believable than you. Everything I've talked about so far depends on internal evaluations, which are hard when you're about to make a big decision. I find Dalio's argument that you should stress-test your thinking with believable people to be very useful because it provides a rigorous metric for the types of people you should ask advice from. It also reminds you that the best solutions aren't likely to live in your head.

Third and last, I've found some of the ideas in Principles to be very useful ‘ways of seeing’. For instance, before this book, I couldn't articulate why I felt certain decisions to be bad — and it turned out that I was reacting to the second and third order consequences of that particular decision.

This seems sort of obvious, but it really isn't. My previous company, for instance, sacrificed long term strategy in favour of short term revenue; after a couple of cycles I realised I was uncomfortable with our constant desire to take on big, lucrative projects, but couldn't articulate why. It turned out that the second and third order consequences meant that we would be forever trapped in the ‘SME loop’ — a situation where we had to constantly get more revenue to expand by a small amount, which then required more revenue to sustain, ad infinitum. This was a suboptimal decision to make, but it wasn’t obvious for the people living in the loop.

I'll end the Principles Sequence in the next post, but for now, I'll close this one with a question: how could you apply the ideas explored in this sequence to your own life? What life decision — big or small — would benefit from the rigour of this approach?

See you at the end.

Next: part 8 — The End of the Principles Sequence.

The End of the Principles Sequence →