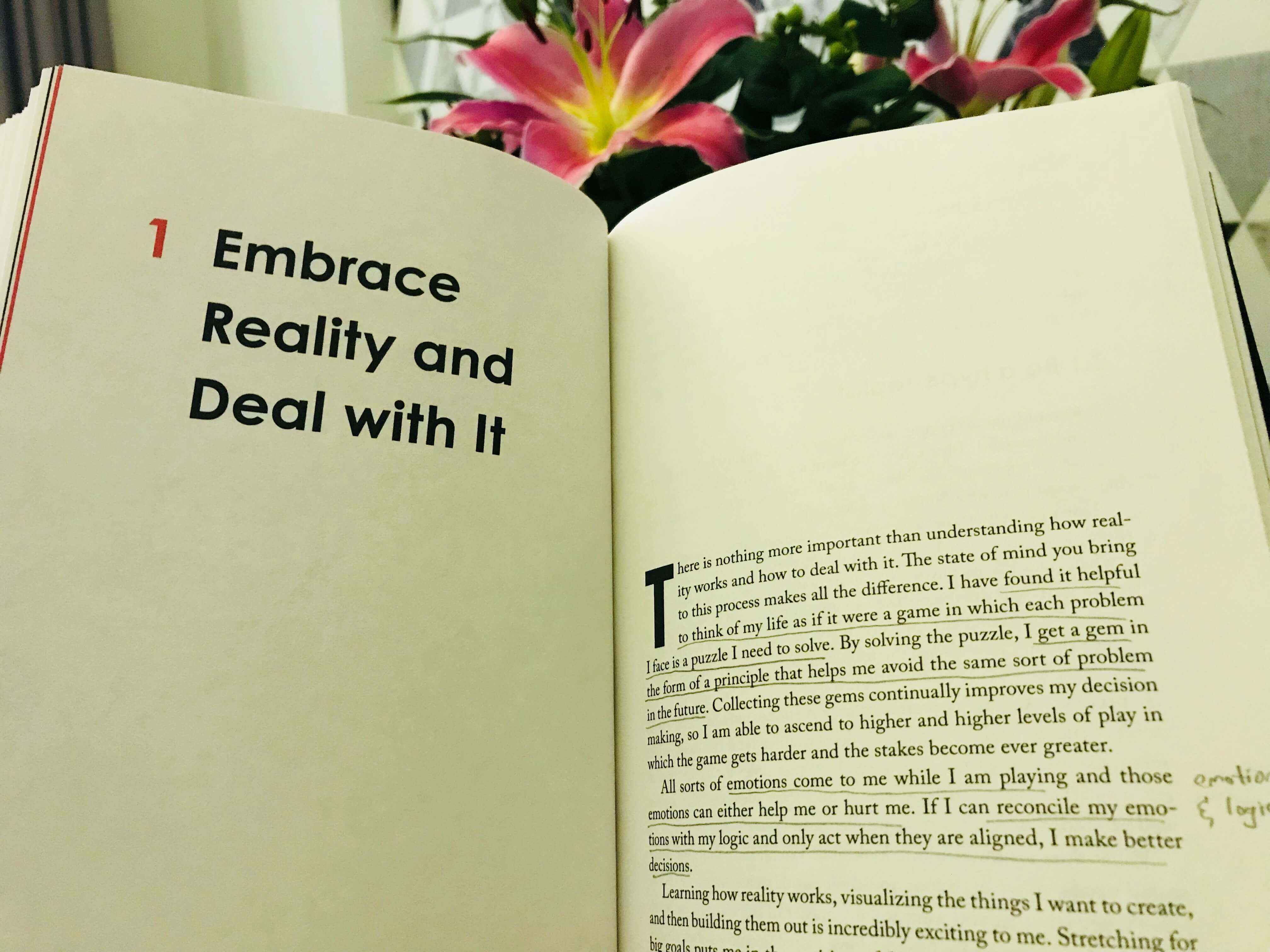 This is part 3 of the Principles Sequence, a series on the Ray Dalio book. Read the overall book summary here.

This is a summary of the first section of Ray Dalio's Life Principles, which concerns itself with ‘dealing with reality’. This section has changed a lot compared to the first version of Principles Dalio wrote (which I read in 2011); I've peppered my reflections throughout.

Embrace reality and deal with it

The title of this book chapter is ‘Embrace reality and deal with it’, which pretty much summarises Dalio's foundational worldview. The ideas here are ways of seeing the world; they lay the groundwork, if you will, for becoming effective.

Here's an example: Dalio argues that reality is a machine, with rules, that you can learn. (He doesn't say that it's a fair machine, just that it's a machine).

Dalio argues that each time you encounter a problem in life, you should methodically experiment with ways to overcome that problem. You should apply time and effort until you find a viable approach; once you do, you should generalise that approach into a principle that you deploy whenever you find yourself in a similar situation. This applies to everything: dealing with bosses, managing projects, learning new skills, dating. Once you have a large enough playbook of such principles, you should be able to navigate life to achieve your goals — whatever they might be.

What principles do you currently hold? It might pay to make a list of them. How are you sure that each of the principles you hold is best suited to responding to your reality? Are they the best at achieving your goals?

There are many objections to this framing. I can hear some of you saying: “Wait, no. This seems like a ridiculous approach to life! The world is complex and unknowable; scientific discoveries are contingently true, and what I learn today makes me realise that I was a fool yesterday. The world isn't knowable!”

This is a fair response. And it gets worse: ”On top of that, arguing this betrays a deep amount of privilege! Of course Dalio can argue that one should adopt this attitude — he graduated from Harvard Business School! He is a successful white man with a brilliant career in hedge fund management, and he grew up at the right place at the right time!”

Yes, you do have a point. The world isn't as knowable as we believe. Similarly, not all success is due to hard work, and not all poverty is due to laziness; privilege does matter. But what of it? Thinking such thoughts — no matter how truthful — isn't useful at an individual level.

In the years since my first reading of Principles, I've found there to be a difference between what is useful and what is factually accurate. (For philosophy nerds, this is the difference between the ‘pragmatic’ theory of truth with the ‘correspondence’ theory of truth.) For instance: IQ scores are correlated with a whole host of positive life outcomes including health, longevity and prosperity. But what are you to do, as an individual? The answer: you should ignore your IQ scores. What is 'factually accurate’ at the population level says nothing about your individual life outcomes. It is also useless as an input on how you should live your life, especially given the fact that you cannot change your IQ, your level of privilege, or the knowability of the world. Useful information here, on the other hand, would be of the sort that Dalio peddles: e.g. ‘embrace your reality and deal with it.’

Dalio's book is very much oriented around what is useful, not necessarily what is objectively true. There are people out there for whom the advice in Principles may be impracticable; for the majority of us, our outcomes would probably improve if we ruthlessly adopt his ideas.

So let's work with that pragmatism. “It is more useful for you to believe that the world is a machine and that you can learn its rules in order to achieve better outcomes.”

The method that reality uses to teach you its rules is that it causes you pain. Your partner dumps you; the job you desire rejects your application outright. Dalio argues that pain and reflection is how you progress. Therefore, whenever you feel pain, you should learn to see it as an opportunity for growth. Pain should prompt reflection, followed by an attempt to change your approach.

Principles presupposes that we cannot change the hand we're dealt, but we can learn to play it well.

Consider the alternative, after all. Admitting defeat, and adopting the attitude that the world is unfair and that there is no way for you to win is surely the wrong approach to take. Principles presupposes that we cannot change the hand we're dealt, but we can learn to play it well.

This is easier said than done.

What Dalio has said so far sounds like common-sense. But try applying it to your life, and you'll find all sorts of difficulties.

For instance, I have friends who have trouble with their bosses and colleagues. Who doesn't have problems with difficult people, after all? The normal approach is to commiserate and to listen to their stories in sympathy. The Dalio approach is that of tough love: we should tell them to take the pain as a signal for reflection, and to urge them to methodically work out a set of approaches until they are able to deal with such people.

Of course, this applies to yourself as well: every time you deal with a difficult person, it is tempting to throw your hands up in despair. But truly effective people would constantly and methodically experiment with approaches to either neutralise, handle, or work around such difficult people. (Dalio would also say ‘write down the principle’ so you would be able to deal with similar people in the future.)

This isn't nice advice to listen to. “Oh, but you don't know Sam,” I can almost hear you say, “They're horrible!”. I find that using ‘difficult people’ as an example is a good one: nearly all of us have had horrible experiences working with lousy/bad/evil people in the course of our careers. And the difficulties of Dalio's approach is made really clear when you think of the unique kind of despair that horrible people can invoke in us. It feels almost impossible to find an approach that works; and yet, it is the rational and necessary thing to do.

My only consolation is that I know Dalio's approach works. I've tried it with some very difficult people (but I'll leave those stories for another day). The larger the set of personalities you can deal with, the more effectively you will be able to work with or around difficult people to achieve your goals. It may seem impossible at the time, but I believe most of us don't systematically work through all the approaches for dealing with difficult personalities. I think you'll be surprised by how far you can go if you try.

Near the end of the section, Dalio gives us a list of 5 decisions necessary for ‘embracing reality and dealing’. They are as follows:

Don't get hung up on your views of how things should be, because you will miss out on learning how they really are.

Dalio has a whole section about learning from nature. I'm skipping all of that, but I will note that his observations on evolution (personal or otherwise) to be rather astute.

On this, however, I think I should quote him directly:

I have found understanding how nature and evolution work helpful in a number of ways. Most importantly, it has helped me deal with my realities more effectively and make difficult choices. When I began to look at reality through the perspective of figuring out how to really works, instead of thinking things should be different, I realised that most everything that at first seemed “bad” to me—like rainy days, weaknesses, and even death— was because I held preconceived notions of what I personally wanted.

There's a tension here between taking the world as it is in order to be effective, vs rejecting the world and shaping it into a normatively better one. But I think that fine line is the difference between practice and theory. I don't expect Dalio's book to have a good answer for it; it merely argues that you should start from a realistic assessment of your world.

Don't let pain stand in the way of progress

Pain + Reflection = Progress. Therefore, Dalio argues that you should learn to see pain as a signal for reflection. It is too much to ask for most of us to recognise pain during the event that causes us pain. But it's enough if we can look back on periods of pain in our recent past as opportunities for us to grow. Therefore: learn to go to the pain rather than avoid it.

Don’t worry about looking good — worry instead about achieving your goals.

There's a saying in the powerlifting world: "it's just you and the bar." This applies to both newbies — who are intimidated if it's their first time at the gym — and professionals alike.

A less trivial example might be the constant temptation I face in taking on freelance work now that I am on my own. Freelance work gives me money (first order consequence) but takes away from my ultimate goal of building a scalable business (second order consequence) which would give me optionality in life (third order consequence). It's not clear which is the best decision, and weighing these factors is something that I have to do on an ongoing basis.

An even less trivial example? Take my indecision between freelance and business and apply that to a whole company. My previous company was stuck in the ‘SME-loop’, because we found it difficult to stop customisation work (immediate money!) in favour of proper general product development (scalable business model!). This is not easy to pull off, so we grew lucrative profits in the short term (first order consequence), at the expense of longer-term growth (second order consequence) and we did it in a way that would punish us if and when we finally decide to commit to proper product development (third order consequence).

This is another one of those aphorisms that is useful even when it is not factual. Derek Sivers has this whole argument about how you should overcompensate to compensate. He says that we are very good at lying to ourselves, so when we overcompensate for a negative trait, we don't compensate as much as we think we are, and actually get it just right.

So: take responsibility for every bad outcome, even when it's caused by a freak accident that nobody could have prevented. The exercise of thinking through what you could have done differently would be useful, even if there wasn't anything you could have realistically done. And, per Sivers, you'll probably end up compensating the right amount.

My point is simply this: Whatever circumstances life brings you, you will be more likely to succeed and find happiness if you take responsibility for making your decisions well instead of complaining about things being beyond your control. Psychologists call this having an “internal locus of control,” and studies consistently show that people who have it outperform those who don't.

So don't worry about whether you like your situation or not. Life doesn't give a damn about what you like. It's up to you to connect what you want with what you need to do to get it and then find the courage to carry it through.

Next up: I'll work through Dalio's 5 Step Process to Getting What You Want Out of Life.