Knowing The Dip Exists is a Heck of an Advantage 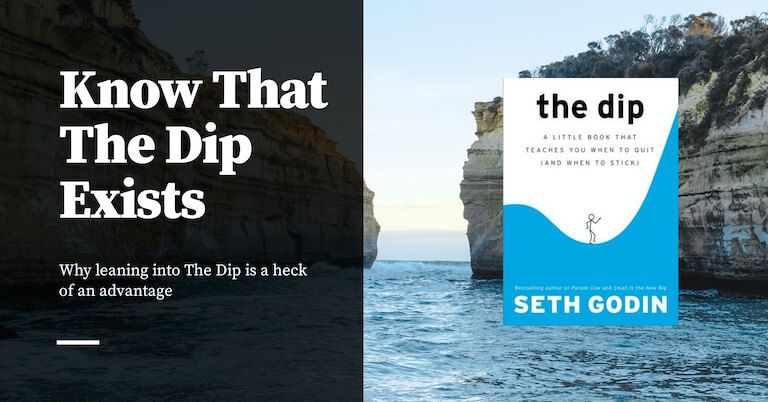 It took me over a year before I began throwing anyone in competitions. And so for a long period, a horrible twelve months, I watched as my peers climbed in their belt rankings, while I stayed a measly beginner — a yellow belt.

Was I discouraged? Of course I was! But for some unfathomable reason I found Judo fascinating, and I didn’t give up. This was unusual. I’d tried other sports (badminton, basketball) when I was younger, and had quickly folded at both. But I stuck with Judo, even when I didn’t see progress for what seemed like a terribly long time.

When I finally began throwing people, a year later, it was a rush. It felt amazing. Little did I know the experience would become foundational, in the best way that sports could be. I would reference my experience in Judo years into the future, whenever I had trouble with math, or computer programming, or business. “You can overcome this,” I'd tell myself, “You overcame a year of losing.”

Of course none of this is special. I'm sure many of you have had similar, foundational experiences — be it in sport, or art, or school. But this was mine; in the long drought that I experienced in Judo, I had overcome my very first dip.

Seth Godin’s The Dip is a short book about a simple idea: every skill worth getting good at has a dip in the middle. The dip is when the going gets tough. It’s when you stop making easy progress, and when your growth slows to a crawl. The dip is when you’re most likely to give up.

Of course, Godin sets this up in order to present the book’s core message: that quitting at the dip isn’t always bad. What you quit and how you quit makes all the difference.

If you know when to quit and when you shouldn’t, you’d have a tool for career success. Godin then goes on to argue that winners quit fast, quit often, and quit without guilt — and they do so until they find The Right Dip to attack.

The Dip’s ideas aren’t particularly novel. But at only 80 pages, the book doesn’t aim to teach you anything new — it merely seeks to remind you of something that you likely already know. We all know that quitting is necessary, except that we forget when we’re in the thick of things. The Dip is a good prod if you need it.

Stated plainly, every winner quits in order to win — an accomplished Olympian or lawyer or entrepreneur is where they are precisely because they gave up something else.  It’s almost tautologically true to say that you can’t succeed without quitting other things. Consequently — and yes I know this sounds obvious! — you should only choose to climb past the dip if you think the dip is worth climbing.

The Dip in a Nutshell

The Dip may be summarised in just a few points. I’ve listed them below, but there’s something to be said about Godin’s presentation — I find myself going back to my copy every once in awhile. The Dip is one of those rare 🌿 branch books that deserves repeated reading.

How do you know if you should quit? Godin offers several rules of thumb:

1) Figure out the curve you’re on: are you in a Dip, on a Cliff, or at a Cul-de-Sac? A Dip is a period of difficulty on a curve of progress. A Cliff is a curve of something addictive and seemingly positive, right up to the point that it isn’t. (Godin uses cigarette smoking as an example, but excessive social media use might also fall into this category). A Cul-de-Sac are those situations — common in careers and in life — where you’re just stuck, and no amount of hard work or grit would get you anywhere. Naturally, if you’re in a Cliff or a Cul-de-Sac, quitting is a good idea.

1.1) You know you’re on a Cliff or at a Cul-de-Sac when …  You know you’re in a Cliff when — well, Godin says this should be obvious to you. But your friends probably know better than you do; they’ll tell you when you’re on the path to disaster. On the other hand, only you will know if you’re in a Cul-de-Sac. Cul-de-Sacs happen when you’re not making forward progress. What counts as forward progress should be most clear to you — Godin points out that there are really only three states you can be in when you’re trying to succeed in a job or a relationship or at a task: making progress, standing still, or sliding backwards. Forward steps, however tiny — or imperceptible shifts, internal to you — count as progress. Everything else doesn’t.

2) If you quit, would it increase your ability to get through the Dip on something more important? This lies at the core of the earlier observation — that success in one thing necessarily requires you to quit something else.

3) If you’re in a Cul-de-Sac and you’re going to quit anyway, is there something dramatic you can do instead that may change the game? Godin tells the story of ‘David’, who was ready to quit. Before he did so, he went for broke — he arranged a meeting with his boss and his boss’s boss (quite a no-no) and calmly explained his problem. Godin writes: “David said that he figured he’d end up quitting, but he liked the company so much he wanted to propose an alternative. So he did (…) David walked out with a major promotion, a brand-new challenge, and a new boss.” If you’re going to quit anyway, might as well try your luck.

4) You should quit if you don’t see a path to becoming the ‘best in the world’ … for some definition of ‘world’. I’ve left this to the last because I think Godin’s phrasing is objectionable. What Godin is trying to say is that if you can’t become Number One in your market, then you probably shouldn’t commit to The Dip. “Best dentist in Wakefield, Massachusetts” is a valid scope for ‘world’; as is “building the best CRM for yoga studios”.

Again, there’s nothing fundamentally new about this. The Dip is great because it’s distilled common sense, bottled in a thin blue book.

There’s one final implication from all of this that I think is rather important. Knowing that the dip exists is a powerful thing. It means that you know to expect setbacks when you’re climbing a skill tree. It means to know that a plateau is normal once you’ve run out of beginner’s luck.

It is one thing to read about The Dip and quite another to experience it, of course. I could reference my year-long drought in Judo and transfer that experience to my attempt at climbing the skill tree of computer programming and management and writing — all the things that have mattered to me in latter life, all of them with horrible plateaus of their own. I’m not sure that I could have ploughed through those plateaus as easily if I hadn’t had an experience to reference. And I’m not sure that reading about it would have helped.

I’d want my kids to have the experience of overcoming a dip — any dip, be it in Fortnite or basketball or chess — before they grow up. And I think you’d want yours to have that too.

Neuroplasticity is a Pretty Useless Idea for Practice →