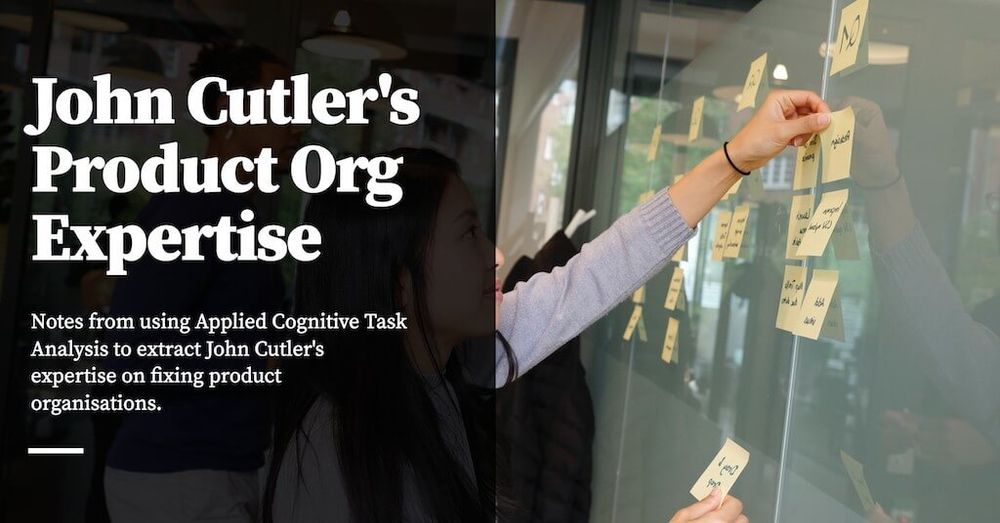 John Cutler is currently the head of product education at Amplitude. An important part of his job is to act as a consultant to product teams that use Amplitude; over the course of his entire career, he’s seen and helped hundreds of product organisations.

Cutler’s superpower is that he is able to talk to a set of product people and — within 8-20 minutes — figure out the system dynamics of their organisation, and then suggest a bunch of experiments to make that system better. His interventions usually take on the form of a prioritised list of experimental changes or team interventions. And he can do this for pretty much any product team in pretty much any type of company.

Of course, this isn't to say that John gets it right 100% of the time — experts are fallible, after all. But it is a pretty remarkable ability — he points out that often, product leaders assume that their best practices scale universally; they don’t realise that different teams in different industries in different cultures around the world have vastly different product practices, all of which might work for them, depending on a host of factors. Cutler doesn’t make such mistakes — or at least he doesn’t make as much of them any more; he’s seen too many possible product org configurations to count.

Sometime in the last year, he attempted to write a book about his skills. And then he came up against a wall. Like most experts, Cutler’s expertise is intuitive and context-dependent. Give him a product team and he's able to dig into their issues; ask him to explicate what he does into a simple framework, and he struggles.

Two months ago, we starting talking on Twitter. I told John that there was a whole set of techniques designed to extract tacit mental models of expertise, and that he was welcome to give them a try. I said that the simplest technique was something called ACTA, or Applied Cognitive Task Analysis, designed by Laura Militello and Robert Hutton in 1998 for practitioners (as opposed to trained researchers). I suggested that I could give it a go with him.

A Quick Recap of ACTA

Finally, you present the extracted information in a cognitive demands table.

Due to my lack of experience using the technique, I only performed the first two tasks with John. I didn’t know how to create a simulation for us to examine together — and in fact I said that this was the most tricky bit of ACTA in my original post on the technique. In retrospect, perhaps I should have asked John for a recording of a product team engagement (though this might violate privacy or ethical rules), or arranged for a call with an actual product team, who was willing to be subject to an ACTA study.

I’ll give this more thought the next time I run ACTA on a willing expert.

We identified Steps 2 and 3 as the parts with the highest cognitive demands:

Of the two steps, we decided to focus on Step 2, Problem Detection. This was partly due to time constraints, but also because it seemed more in line with John’s goals for his book (as I understood it, he intended it to be a book on how to do what he does when he’s diagnosing the problems of product teams — and the problem detection step is what seems to be the most mysterious part of his expertise).

We ended up doing five probes, due to the nature of John's expertise:

The biggest difficulty with using ACTA was in deciding when to dive deep and let John go on about his experiences, and when to move on to the next set of probes. In our initial call, I let John go on too long while setting up the Task Diagram, and then we ran out of time, so I didn’t do a good job of the Knowledge Audit.

The second call went much better.

I think the biggest mistake that I did was that I grossly underestimated the amount of time it would take to do the whole skill extraction exercise. I scheduled an hour for our first call, whereas a more appropriate length might’ve been two hours. In the end, we did two separate calls together, the first being 1.5 hours long, and the second two hours long. It’s hard to say if these times are normal, but I wouldn’t go below two hours in the future.

The other problem I had with the process was that I was unsure if I was producing useful information. John seemed happy with our progress, but I wasn't so sure.

After our first call, but before our second, I had the good fortune of talking to Laura Militello and Brian Moon, hosts of the NDM podcast. Militello, of course, was one of the two creators of ACTA, and when I asked her if she had any tips for using it, she said to keep the objective of the interview at the back of my head.

“Are you doing this for a training program? Or are you designing some software?”

“Then you should ask the questions with the book in mind.”

This was pretty good advice — in my second call with John, I dropped certain probes, because it was clear that he wasn’t going to be able to put it into written form. I told him that this would be a slightly different interview if he were designing a training program for the novices in his team, which wasn't something that was apparent to me before I’d tried the technique. John agreed that that was a pretty interesting nuance.

My only regret is that I didn’t get to do the Simulation Interview, which I think prevented me from creating a Cognitive Demands table. But I’m still rather happy for a first try — we both got a lot out of the Knowledge Audit alone.

Overall, I’m rather pleased with how this ACTA experiment turned out. If anything, it tells me that Militello and Hutton achieved their stated goals with the technique: ACTA was designed for practitioners in the field, and — as a practitioner in the field — I found the learning curve only a little difficult to climb.

I could also tell that John was pleased with the results of our exercise. Shortly after our calls, John tweeted:

This was something I’d heard directly from him. Near the end of our second session, he told me that he’d always found it difficult to articulate a clear framework for his product ability — which was vastly more nuanced than what he saw published in books and blog posts on the web. But of course he wasn’t able to describe it — experts are often unable to tell you how it is they do what they do. I’ve noticed that John’s Twitter bio reads “I like the beautiful mess of product development” — and his intuitive expertise is exactly that: a beautiful, effective, but mostly tacit ‘mess’.

I'm pretty pleased that I got to help him explicate some parts of his expertise. God knows how long he took to build it.

I’m looking for other opportunities to put ACTA to practice. I have a couple of candidates in mind — the most important of which is my former technical lead (who has good programming taste), and whose code taste was what started me down this path in the first place. For what it’s worth, I’ve signed up and paid for the Self Study course offered by the CTA Institute — which is a training organisation created by Militello, Hutton and Moon. I’m hoping that I’ll get some pointers on simulation design by the end of it.

If you’ve read to the end of this piece, I’d like to encourage you to give ACTA a try. Go find someone who’s willing to spend some time with you, who has some expertise that you might want to explicate for yourself (or even for them!) The method isn't that difficult to do. More importantly, you might surprise your subject by uncovering elements of their expertise that they didn’t already know.

To be honest, I've found that last bit to be the most rewarding part of putting ACTA to practice. The look of delight on John's face at the end of our two calls was pretty damned awesome. Godspeed, and good luck.

Ability to See Expertise is a Milestone Worth Aiming For