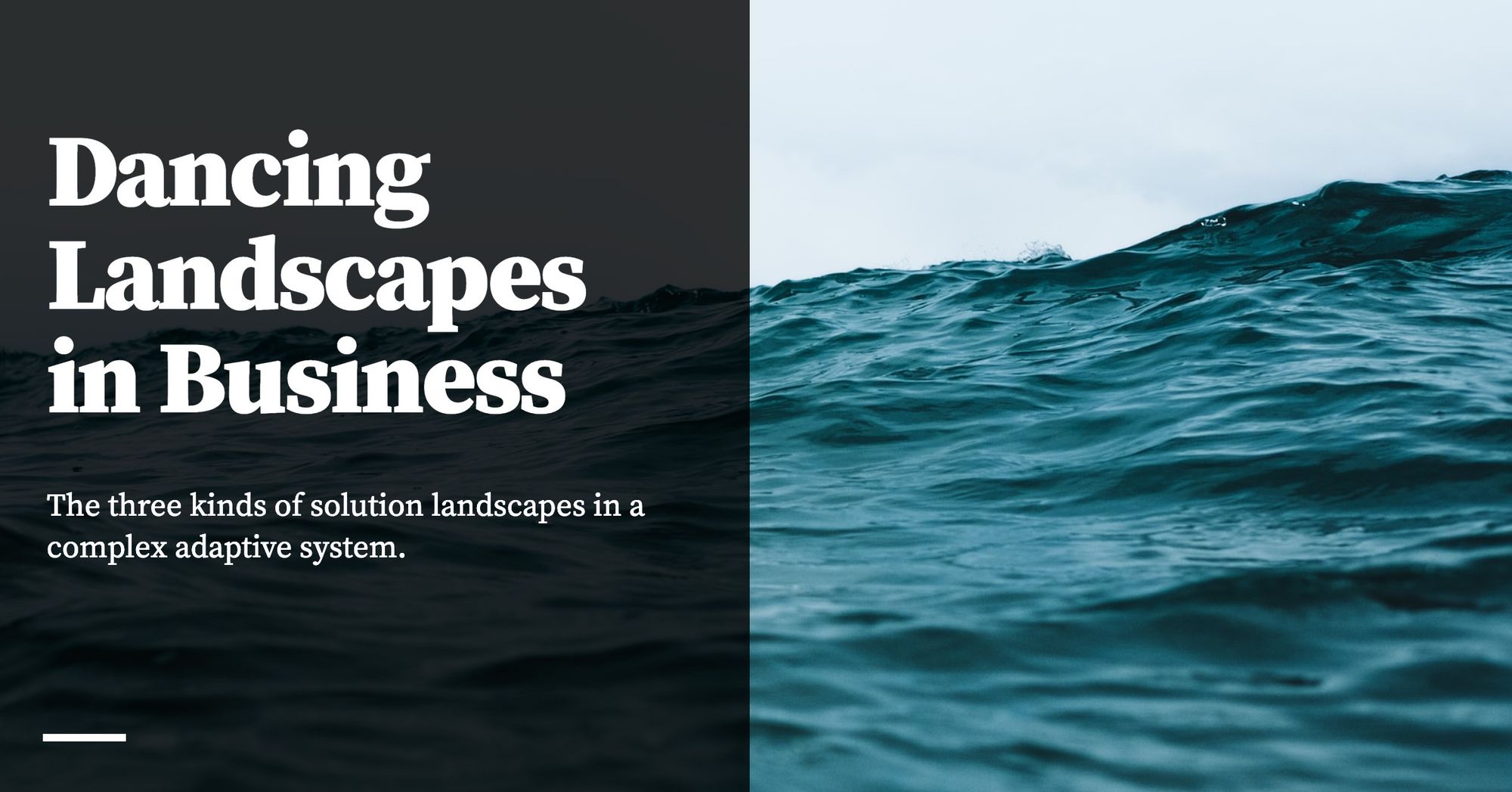 I had a conversation with Dr. Rand Spiro a couple of weeks ago, which will be the basis for this and next week’s essay. Spiro is the primary researcher behind Cognitive Flexibility Theory, a theory of adaptive expertise in ill-structured domains. We’ve been talking about CFT a lot here at Commoncog: it happens to be one of two theories that underpins a whole number of accelerated expertise training programs; I wrote an entire series of blog posts introducing the theory and then unpacking its implications; one of those implications — a novel method for reading history — went somewhat viral.

The conversation with Spiro was wide-ranging, but I want to talk about something that he said when I told him I was mostly interested in CFT in the context of business. I have Spiro’s permission to talk about this bit of our conversation — he says, and I quote:

Spiro: In complexity theory, they very often think of problem solving landscapes. The simplest kind of landscape they call a Mount Fuji landscape. The highest part of the landscape is the solution — (the rest of the landscape) is flat, and then there’s Mount Fuji or Mount Rainier, way above the rest and from anywhere in the landscape you can see it; (it’s) very well defined. There is one best answer. That’s the non-complex landscape.

Then the kind of complex landscape — when we deal with (any amount of) complexity at all — is what’s called a rugged landscape. There’s a lot of mountains, and perhaps one is bigger, and is a better solution, than all the other peaks, but you can’t see it because if you’re over here, it’s blocked. So you have to navigate the landscape to find different views to find the best peak.

Me: That’s business! Well, in certain markets, and at certain times, business is a dancing landscape. But it’s not always dancing.

Spiro: That’s right! But it’s when it starts to dance that you end being caught … and then you’re done. You have to be ready for those moments or you die. So it’s not dancing all the time, but you have to be attuned to when it’s going to start to dance, when things are changing. And that’s happening more and more often. Change, in fact, back in the Model T, Henry Ford days (wasn’t as bad). But now, especially in industries related to technology and so on, the timeframe when you reach the next dance is sped up. You need to have more of a dancing mindset more often, or you become Ford, or you become a dinosaur like General Motors that eventually (got into trouble).

But even when you don’t have times of change, you can have dancing in ordinary, non-macro change times. Say you’re an airline. You’re Delta Airlines and you’re coming up with a new set of routes and prices and so on. It’s a rugged landscape and it’s complex but you think you’ve come up with some strategy that’s going to maximise your profits. But then just as you’re about to announce it, American Airlines announces its new plan, where it’s going to fly, and what its prices are going to be and so on. So now you’ve just solved a complex rugged problem, but you’re about to announce your strategy for an old landscape!

Me: I love this analogy. This captures the challenges of business so well. And I think some of the most wicked situations in business are when you’ve spent, say, 20 years learning your rugged landscape, and you’ve figured out how to win for your context, and then one day the landscape starts dancing and you’re screwed.

Spiro: Or it can happen tomorrow (in the course of regular execution). Somebody beats you to it and announces their plan and changes the whole competitive landscape, and you’ve got a new problem.

CFT is a theory of adaptive expertise. It explains how experts are able to deal with novel situations. To summarise crudely, experts in ill-structured domains construct temporary schemas on the fly, and they do this by combining fragments of cases that they’ve observed in the past. The theory tells us how to build and accelerate this kind of expertise. I’ve covered all of this before, so I’m not going to bore you with the details again; if you want to learn more about the theory or try to put the theory to practice to accelerate your learning, the one blog post that covers all of  this may be found here.

I can think of two objections to Spiro’s point. The first is that complex adaptive systems don’t ‘dance’ forever — rather, they tend to go through ‘phase transitions’: periods of disruptive, volatile change, before settling into new equilibriums. One argument you could make is that perhaps exceedingly high cognitive flexibility is well adapted to times of rapid change; a more classical ‘optimisation’ stance is better fitted to the stable (but still rugged) landscapes in-between. Can a mind switch rapidly between both modes? Maybe! But I’m not 100% sure.

A second objection — one that I’ve ruminated on in the weeks after our call — is that ‘solution landscapes’ seem a heck of a lot more theoretical compared to the core ideas of CFT. Recall that CFT is about expertise in ill-structured domains. An ill-structured domain is a domain where there are concepts, but the way those concepts show up in real world situations are highly variable, and dependent on the specific details of the context in question. Business is a remarkably ill-structured domain, for instance — concepts like ‘scale economies’ or ‘network effects’ look very different depending on the industry or business in question. And so CFT is useful precisely because it explains how to get good in such skill domains; it explains why you and I should study cases above and beyond principles or frameworks alone.

I suppose you could say that dancing periods are when concept instantiations become the most variable. But I think that the domain of business is broadly ill-structured, and it doesn’t matter if you’re in the middle of a phase transition or a stable landscape or what-have-you; it’s just important to ground your understanding of business concepts in real world cases.

As it turns out, legendary finance researcher Michael Mauboussin covers the exact same concept in chapter 23 of his book More Than You Know.

It’s important to note, though that you can’t focus solely on the evolution of one company or industry because of the central role of coevolution. Actions trigger reactions. Sometimes companies cooperate with one another, sometimes they conflict. Nothing happens in a void — companies are always jockeying to improve their position. Further, the more dynamic the fitness landscape, the greater the necessary rate of adaptation.

Mauboussin then describes the three types of fitness landscapes as an answer to the first question, though he uses slightly different terminology:

Stable. These are industries where the fitness landscape is reasonably stable. In many cases, the landscape is relatively flat, and companies generate excess economic returns only when cyclical forces are favorable. Examples include electric and telephone utilities, commodity producers (energy, paper, metals), capital goods, consumer nondurables, and real estate investment trusts. Companies within these sectors primarily improve their fitness at the expense of their competitors. These are businesses that tend to have structural predictability (i.e., you’ll know what they look like in the future) at the expense of limited opportunities for growth and new businesses.

Coarse. The fitness landscape is in flux for these industries, but the changes are not so rapid as to lack predictability. The landscape here is rougher. Some companies deliver much better economic performance than do others. Financial services, retail, health care, and more established parts of technology are illustrations. These industries run a clear risk of being unseated (losing fitness) by a disruptive technology.

Roiling. This group contains businesses that are very dynamic, with evolving business models, substantial uncertainty, and ever-changing product offerings. The peaks and valleys are constantly changing, ever spastic. Included in this type are many software companies, the genomics industry, fashion-related sectors, and most start-ups. Economic returns in this group can be (or can promise to be) significant but are generally fleeting.

And then he concludes the chapter by arguing that each of these three fitness landscapes call for different strategies and therefore different forms of organisational design:

Consultant Eric Beinhocker suggests two general strategies to improve fitness. He calls the first “short jumps,” small incremental steps toward a peak. Most process-improvement initiatives are short jumps. He labels the other “long jumps,” discontinuous moves that may catapult a company to a higher peak or may leave it in a lower valley. Long jumps include meaningful acquisitions in unrelated fields and investing in nascent products. I believe that a company’s fitness landscape largely defines the appropriate balance between short and long jumps.

For example, the focus in stable industries is often process optimization—continual small jumps. Long jumps are potentially costly and distracting, and therefore do not yield much value. This is not to say, for example, that technology will not touch these industries. It has and it will. However, the technological improvements are generally incremental and replicable.

To go to the opposite extreme, companies that compete in roiling fitness landscapes must focus more on long jumps—pursuit of the next big thing—because even if they find themselves at a peak, the shifting landscape assures that the peak quickly disappears. Since product life cycles are short, adaptation is more important than optimization.

Companies that compete in coarse fitness landscapes quite logically need to find a blend between short and long jumps. Indeed, models show that this mix is the best search strategy for a correlated landscape.

(I’ve checked, but I don’t know what models Mauboussin is referring to. The endnote that marks that sentence links to this HBR article about Jack Welsch’s legacy, with the note: “General Electric, on Jack Welch’s watch, effectively combined optimization with risk taking. For example, Welch gave the leaders of GE’s largest businesses several hundred million dollars for discretionary spending with ’no questions asked.‘”)

Just as a different mix of short and long jumps is appropriate for different fitness landscapes, so too are different financial tools and organizational structures. Traditional discounted cash flow analysis is well suited for businesses that compete in stable fitness landscapes. A centralized management approach is effective, as industry activities are often clearly defined.

A coarse fitness landscape requires a blend of traditional cash flow tools and strategic options. Strategic options are the right, but not the obligation, to pursue potentially value-creating business opportunities. Finally, companies that compete in roiling industries must lean more on strategic options to assess their current and potential fitness. Further, these companies are well served to adopt a “strategy by simple rules” approach. This decentralized approach has agreed-upon decision rules but lets individuals make decisions at the local level as they see fit.

I don’t have strong opinions on these ideas — I’ve not tried these concepts out in practice, nor have I done a sufficiently rigorous review of business history to verify that these approaches are universally sound. As a result, I’m not sure how much weight I should give these metaphors. But I do like the imagery of ‘stable’, ‘rugged’ and ‘dancing’ solution landscapes, and I do think the vocabulary is generally useful. And now, because you’ve read this, you have the same images I’ve learnt, and the same vocabulary I do.

Focus on the Cases → 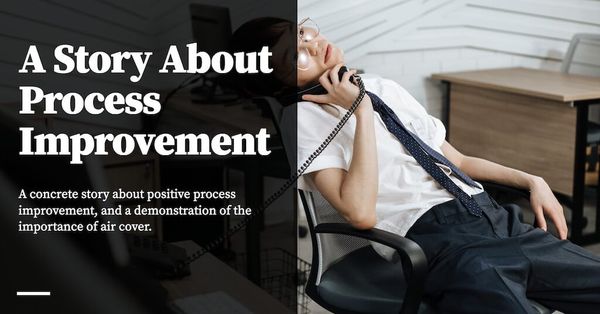 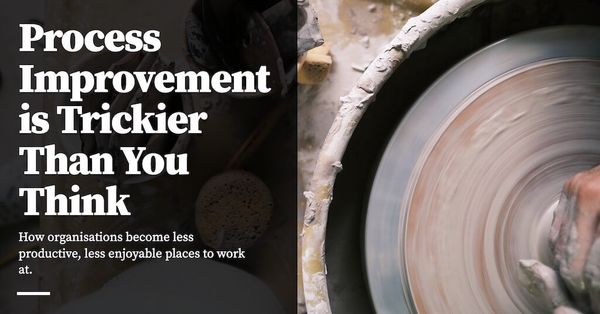 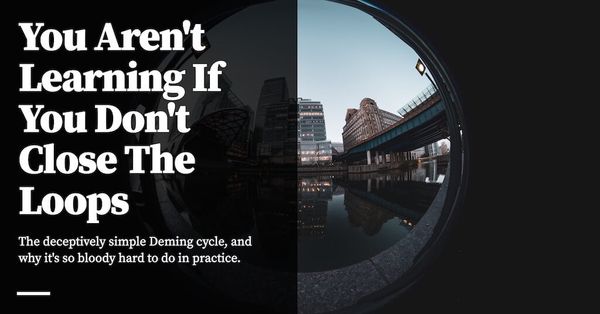 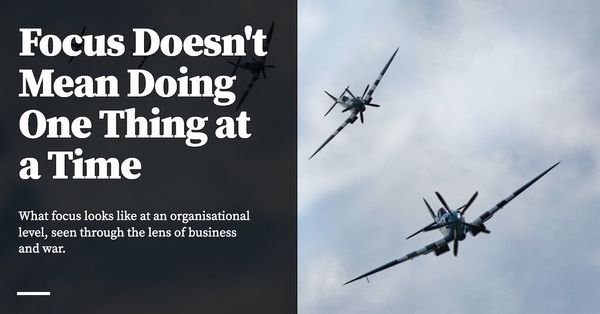